Our Adoption Marketing Blitz Paid Off

Our Adoption Marketing Blitz Paid Off 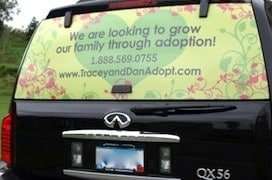 In early May 2010 my husband, Dan, and I were approved to adopt and began what we believed would be a long journey to find our adopted child. Knowing that two-thirds of the domestic adoptions our agency processed in 2009 were designated adoptions, or those that were matched outside of the agency’s “book,” I knew that our personal networking and advertising were going to be important parts of the process. Because of this I signed up to go to an all-day outreach seminar hosted by our agency.

At that seminar, Hal Kaufman from My Adoption Advisor was the opening speaker. He made some very valid points regarding outreach, one of which became my mantra while developing our outreach strategy:

You don’t wait for a job. You look for a job.
So why would you WAIT to adopt?

We were not waiting to adopt. We were looking to adopt. This was a very important distinction, in my opinion. In addition to the resources I developed we submitted a profile on a national hosting site and I placed some online ads on Craigslist in states where I knew it was legal to do so. I also placed a print ad in a southwest Twin Cities Metro publication and put a huge graphic on the back window of my car advertising our desire to adopt.

I’m fortunate that my husband owns a large-format printing company specializing in vehicle graphics and was able to print and install this graphic for me. We also made some smaller, less “in-your-face” magnetic bumper stickers and put them on the cars of willing friends and family members.

After I was pleased with the website and had all of our business cards and 4 x 6 postcards printed I sent a message to everyone I know to tell them that we are looking to adopt. I asked them to post our intent on their Facebook pages or distribute our business cards and/or postcards in their community. I basically began a marketing campaign to find an expectant parent who was considering adoption and might consider us to parent their child. I would leave my business card with the bill when we were out at a restaurant, park my car at very busy intersections where I knew my window graphic would not be missed, and slip in the fact that we are looking to adopt into EVERY conversation I had. We took the “shotgun” approach–letting as broad of an audience know what we were working toward to maximize our chances for a faster match.

We still intended to go into our agency’s book, just to cover all of our bases, so I finished our profile. The day after I submitted all of the paper work to go into the agency’s book we got “the call.” This was just 5 weeks after we received our home study approval! It also happened to be my birthday.

This young lady from out of state was 4 months along and considering an adoption plan for her baby. We talked for quite some time and she was blown away by the fact that it was my birthday. She considered it a “sign” and did not contact the other 4 families she had on her list.

I asked her where she found us (assuming the national profile hosting site) and she said Craigslist. I was shocked. I launched a massive marketing campaign and what worked was a free on-line ad? But I knew that if I had not done all of that other stuff this would not have worked out the way it has. We had to really put ourselves out there.

The baby is due in early December so we are not 100% sure what will happen, but we’ve developed a great rapport with the expectant woman and have plenty of resources in place should this not work out. Assuming it does work out, I received one heck of a birthday present this year thanks to some hard work and determination!

The Citrons finalized the adoption of this young woman’s baby, as planned.

Do you have a plan for connecting with your future child’s birth parents? If not, take our Adoption Advertising & Networking course and learn about more than 30 outreach ideas and develop your plan as you complete the course exercises.